This video is hosted from www.youtube.com
Use VPN if this video is blocked in your country.
Report here if this video is not working.
Disclaimer DMCA
Another UFC 219 bout added to the card on December 30th in Las Vegas, Nevada. Hoodies: http://teespring.com/stores/mmadigest Gokhan Saki will have his 2nd UFC bout at UFC 219 on December 30th vs Khalil Rountree. Rountree KOd Paul Craig in July. Saki is fresh off a win on September 23rd. UFC 219 has Condit vs Magny, Cruz vs Rivera, and Calvillo vs Esparza. They're trying to add Cyborg vs Holly Holm to the card as well for the women's featherweight title. Walt Harris takes his loss to Fabricio Werdum in stride. Werdum defeated Harris by armbar in 65 seconds over the weekend at UFC 216. Big John McCarthy wasn't reffing at UFC 216 and won't be doing any shows until November 4th due to injury. One week after that card Diego Sanchez takes on Matt Brown. John Kavanagh thinks the answer to the weight cut issue is regular weigh ins year round. If you are more than 10% over contracted weight, then you're moved up. They'd be weighins at the beginning of the month or random ones by surpri
<< Previous Video Next Video >> 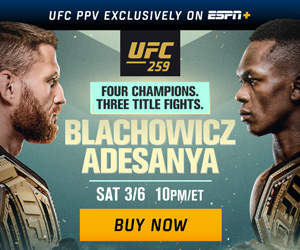 Things to Know about UFC Fight Night: Covington vs Woodley

Michael Chandler is Backup Fighter for Khabib vs Justin Gaethje

UFC Back at Fight Island for 5 Weeks

Joanna Jedrzejczyk IG Post - What a beautiful end to the day. ?? Today I admired the setting sun with a cup of coffee...

Conor McGregor IG Post - My advice Keep it a buck twenty with yourself at all times ?? @mcgregorfast

Alexander Volkov IG Post - 'I always tell the truth. Even when I lie.' (C) I flew to @eduard_vartanyan and @armen__g...