Fight of the Week: Holly Holm With a Familiar Head Kick and Title Win at Legacy 30

This video is hosted from www.youtube.com
Use VPN if this video is blocked in your country.
Report here if this video is not working.
Disclaimer DMCA
AXS TV vet and former Legacy Fights Champ Holly Holm is set to defend her title at UFC 196. Before she takes on Miesha Tate, watch her win the Legacy Bantamweight strap in front of her hometown fans at Legacy 30 in this bonus "Fight of the Week" AXS TV is Your Home for MMA every Friday Night! Find AXS TV HERE: http://bit.ly/WtTUDr

From Dakota Cochrane to Jorina Baars vs Cris Cyborg, the very best of March on AXS TV Fights! LIVE fights return May 9th with MFC 40 in Edmonton!

Chad Robichaux and Will Campuzano face off for the inagural Legacy Flyweight Championship. Legacy 12 is LIVE on AXS TV Friday July 13th at 10pm ET

The RFA has become a springboard to the UFC and on July 25th both Joshua Copeland and Jan Jorgensen will hope to get attention when they fight for the RFA Heavyweight Title on AXS TV! Find AXS TV H

Hop the border with AXS TV Fights October 4th as the Maximum Fighting Championship returns! Marcus Edwards and Shane Campbell meet in the night's Main Event only on AXS TV! AXS TV is Your Home for

Before you watch Tiffany Van Soest return to AXS TV at Lion Fight 21, watch her demolish her opponent at Lion Fight 12. AXS TV is Your Home for MMA every Friday Night! Find AXS TV HERE: http://bit.

Highlights from around the world of MMA. AXS TV is Your Home for MMA every Friday Night! Find AXS TV HERE: http://bit.ly/WtTUDr

Holly Holm is back in action Saturday at UFC 239! Check out her sick AXS TV debut back in 2013! 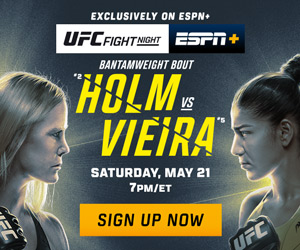 Is Jan Blachowicz next in line?

Jorge Masvidal: ya wife is me dms

Does Holly Holm have a gripe for her loss? What's next? | UFC Fight Night 206